Module 2: This course is for third sector frontline staff who work with adults (18+) with low level mental health support needs i.e. Those with undiagnosed mental health conditions or those with low mood or worry.

Module 3: This course is for third sector frontline staff who work with adults (18+) with medium level mental health support needs who may have one or more coexisting conditions.

Module 4: This course is for third sector frontline staff who work with adults (18+) who are vulnerable to suicide risk. 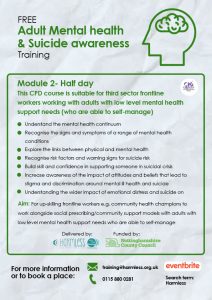 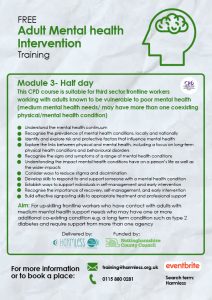 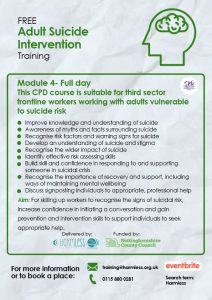 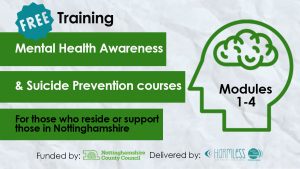 Sesame Street is expanding the storyline of resident muppet Julia, who is on the autism spectrum, as part of Autism Acceptance Month this April. As part of the initiative, viewers will get to meet her family — including her parents, big brother and dog — for the first time.

In 2015, Sesame Workshop launched “Sesame Street and Autism: See Amazing in All Children,” an online initiative introducing Julia as a digital character in a storybook called “We’re Amazing, 1,2,3.” Sesame Workshop spent five years on the initiative, consulting with 250 organizations and experts within the autism community. Julia made her on-air debut in April 2017 and has since been a regular character on the show.

“We’re thrilled to expand Julia’s world with her parents, big brother, and her adorable dog, Rose, in our new resources,” Sherrie Westin, president of global impact and philanthropy at Sesame Workshop, said. “Children with autism often face unique challenges, as do their parents and siblings. But every family faces challenges of some sort, which is why we are focusing on what all families have in common. In a family, everyone has different roles, challenges, and strengths, and everyone can learn from one another.”

Through Julia, kids learn that while some kids with autism may be able to speak, verbal communication can be challenging, resulting in single words and sometimes, when overwhelmed, the use of a communication board. The show has highlighted other characteristics of autism, such as stimming, and how to respect the boundaries of someone who prefers minimal physical touch. The new videos and materials are available in English and Spanish.

“The response to Julia and our ‘See Amazing in All Children’ initiative has been nothing short of amazing,” Westin said. “Our goal is to increase understanding, to increase awareness, to increase empathy. And by helping others understand, and by helping autistic children feel less alone, Julia is changing the world.”

On April 8, HBO and PBS KIDS will premiere a Julia-focused Sesame Street episode. Julia’s friends, Elmo, Abby Cadabby and Alan play “hair salon” with Julia to help her better cope with an upcoming haircut. According to Sesame Street, this segment was created as a response to families who asked for resources addressing common challenges for children on the autism spectrum.

In addition to introducing new resources and characters to further develop narratives surrounding autism, Sesame Workshop is expanding its autism initiative by partnering with Barnes & Noble.

On April 6, the bookstore chain will hold a sensory-friendly reading of the “Family Forever” storybook and accompanying activities in over 600 locations. The 2018 digital storybook will be released as a hardcover edition by Random House.

Every child, adolescent or adult who enters is a friend to someone, loved by someone, a family member, a teacher, a pupil, a colleague. Every person has a network of people around them that they are important to.

Every person who enters our service has their own unique needs, and our wonderful team work in many creative ways to support those needs to aid recovery.

We also need items to help our therapists and support officers to do the best job they can possibly do.

If you would like to support our service please take a look at our Amazon Wish List and see what we’re currently in need of.

On behalf of our team: thankyou! Your support is truly appreciated. If you buy something off this list please send us an email to info@harmless.org.uk so we can personally thank you.

I recently became involved with the Joseph Maley Foundation, an organization that was founded in 2008 by the parents and siblings of Joseph Maley. Joseph was born with physical and cognitive disabilities and was nonverbal. He touched the lives of many in his 18 years of life, and the foundation’s goal is to carry on his legacy by serving children of all abilities. They provide sports programs for children with and without disabilities to learn to adapt and play together. They provide education to school-aged children about what it’s like to live with a disability through their “disABILITY Awareness Weeks” at multiple schools in the Indianapolis and surrounding areas. Their mission is to educate children about disabilities, and to hopefully make it easier for able-bodied children to understand and accept others living with disabilities.

I have become a regular speaker at many of the “disABILITY Awareness Week” programs. I speak to elementary school children about my disability, how it affects me, and more importantly, how to see the person behind the disability.

I feel it is important to educate children about disabilities. Children are inquisitive. So many times I hear parents shush their children when they ask about someone’s disability in public. It’s not wrong to ask. If they never ask questions and are never educated about disabilities, they will be less likely to try to befriend a peer with a disability.

Humans are conditioned to notice differences. When we see someone using a wheelchair or other assistive device, we notice it. That’s not wrong, it is human nature. Our mission is to educate others, and allow them to be inquisitive. Asking questions opens up a dialog that can help you understand that person on a deeper level. Once we understand our differences, they become less scary. Opening this type of dialog takes you one step closer to understanding and acceptance.

Bullying is a hot topic in schools and in our society. Unfortunately, according to Pacer’s National Bullying Prevention Center, “Children with disabilities are two to three times more likely to be bullied than their nondisabled peers.” They report that, “One study shows that 60 percent of students with disabilities report being bullied regularly compared with 25 percent of all students.”

If we can have open discussions with children about disabilities, this helps eliminate the fear of approaching someone with a disability and facilitates a safe place for them to get their questions answered. More importantly, it shows them that people with disabilities are not much different than themselves. We all have weaknesses, barriers and things we are self-conscious about. When we look past our differences, we find more similarities than we realize at first sight.

When I speak to children about my experiences as a person with a disability, I try to focus on the fact that while we may do things a little differently, we also have many similarities. I encourage them to ask about disabilities because that is the only way they will learn. Education is a powerful tool to combat bullying. When we know more about a person, when we can see them as human beings with feelings, we are less likely to judge them unfairly.

Just over 2 weeks until Sophia braves the grueling 42km of the London Marathon. Sophia is running in aid of our suicide prevention service, and there is still time to donate https://localgiving.org/fundraising/this-mum-is-on-the-run/ Good Luck Sophia, we are all behind you!!! ???

A teacher in the San Francisco Bay Area has gone viral after she shared an ingenious idea on how to help students with their mental health. After having several students struggling in the past five years, English special education teacher Erin Castillo decided it was time to do something – and so, introduced the mental health check in board in her classroom.
Students can pick up a post-it, write their name on the back and place it wherever they like on the sheet with six categories from ‘great’ to ‘in a really dark place’. They can also specify that they ‘wouldn’t mind a check in’ if they need it, without having to utter the words, but simply placing their post-it on that part of the sheet.
Erin wanted students to see they’re not alone in feeling low, she told Insider in an interview. ‘So many people think they’re the only ones struggling,’ she said. ‘Kids need to hear that they’re not alone and what that support looks like.’
After seeing how well it worked with her own students, Erin decided to share the concept with the wider teacher community and uploaded a free digital copy on a platform known as Teachers Pay Teachers. The check in sheet quickly went viral after that with one teacher, Jessie Cayton, sharing it on her Instagram page after she created one for her own class.
Soon after, a Facebook page called Suicide Awareness / Prevention, which has over 600,000 followers, posted about it on their wall. It has been shared 169,000 times and over 16,000 people have commented on it so far, with more teachers saying they’ve now adapted the technique. One also suggested it might be useful to have this same type of board in a teacher staff room – giving them a chance to unload too. People also showcased their own boards on Instagram. Erin felt very emotional after seeing her board go viral. ‘I just started crying,’ she said. ‘My husband asked me why I was crying, and I said “because kids are being saved everywhere”.’
What a wonderful idea? ?